Words Cubed is part of the Utah Shakespeare Festival’s new-play program that seeks to nurture and develop openly submitted, solicited, and commissioned plays by providing a professionally supported platform for readings, workshops, and fully realized productions as part of an ongoing commitment to create a diverse body of work.

Playwrights spend a week at the Festival in rehearsals with our actors and directors refining and rewriting their plays. At the end of the week, the revised plays are presented as staged readings or workshops, followed by a lively, interactive discussion between the playwright, actors, and audience.

Let. Her. Rip. is the story of comradery, activism, and ferocity which lies in the crosshairs of the Match Women labor movement and the Jack the Ripper murders of 1888. Behind the scenes labor leaders, Em, Liza, and Nana are busting their lady balls to make the East End safer for women and all working people when the headlines move away from their accomplishments to the mysterious man mutilating women in the streets. Women they know. Women of their community. Neighbors and friends. They support and reignite each other in their fight against deadly misogyny, police brutality, personal demons, their own flawed saviorism, social reform, and a better life for all poor East End women. But as tensions come to a head, who will make the final rip?

Content Advisory: This play is written for a contemporary adult audience. It contains references to sexual violence and an abundance of profanity.

Balthazar develops through a series of encounters between Portia, a young Venetian noblewoman, and her cousin Bellario, a doctor of law. Portia chafes against the restrictions imposed by Renaissance society and her family, and turns to Bellario to help her forge her own path to self-realization – a path that leads her to become a lawyer who takes on the case of defending the life of her husband’s best friend, while resolving the threat to her marriage posed by that same friend. Those familiar with Shakespeare’s The Merchant of Venice may recognize the inspiration for the play!  But Balthazar takes this pivotal character from the original and spins a separate, compelling story.

Content Advisory: This play contains no instances of onstage intimacy, but has several references to it. 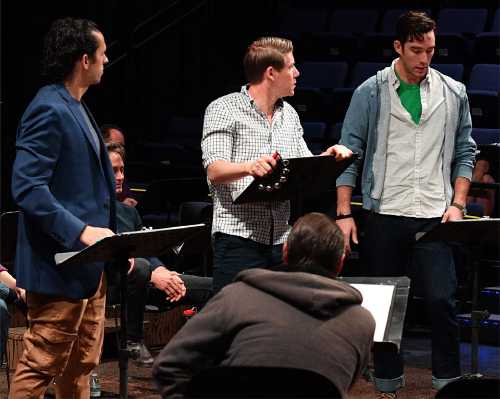 The plays in this series are written for contemporary adult audiences, and some plays may contain themes and language not appropriate for children and that some may find offensive. Check the content advisories for each new play for more information.